You are here
HomeEarly Milled

Milled coins were minted for the first time in 1561, in the reign of Elizabeth I. A screw press powered by horses was used in their manufacture, under the supervision of a Frenchman, Eloye Mestrelle. The quality of the coins was vastly superior to the normal hammered coinage, but production was much slower. Mestrelle was also resented as an interloper by the mint workers because of his nationality and unpopular because his machinery was perceived as a threat to their continued employment. After ten years Mestrelle was dismissed and the milled coinage ceased. Later Mestrelle turned to counterfeiting, for which he was hanged in 1578.

In gold, the milled coinage consisted of a limited number of half pounds, value ten shillings, crowns of five shillings, and extremely rare half-crowns of two shillings and sixpence, all beautifully styled and well-struck and circular. However, though produced throughout the reign, there were no milled versions of the gold angel, half angel and quarter angels, all of which had the same respective values but different designs. The gold milled coinage is found with two mintmarks, a star or a lis.

The silver shilling was over 30 mm diameter, and suffered slightly by a much shallower relief, particularly on the reverse. This may have been a result of the thicker metal flan used. Only one mintmark, the star, is known and it is thought that they were only minted in 1561. A slightly smaller version from the same period is usually better struck.

Also in silver, the sixpence was produced nearly every year over a period of eleven years and all were dated. Because of their long mintage, they are relatively common. Various mintmarks were used. Rare silver groats of four pence were minted in 1561 and silver threepence from 1561-1564. Despite the longer production period the latter coin is also fairly scarce. Equally scarce are the silver half groat or two pence. The scarcity of these two denominations and the absence of a milled silver penny reflects the difficulties in milling these small coins.

After the departure of Mestrelle almost sixty years elapsed before the Mint was prepared to experiment with another milled coinage. Again it was the work of a Frenchman, Nicholas Briot, who joined the mint as chief engraver in 1628 during the reign of Charles I. His coinage was of an extremely high standard, in contrast with the hand-made hammered coinage which was generally of poor quality. The first series was minted in 1631-32 and included all the gold denominations.

A second series consisting of only silver coins was produced in 1637-39. Unfortunately, Briot and his milled coinage were as unpopular in the mint as Mestrelle, and probably for the same reasons. In 1635 Briot was appointed as Master of the mint in Scotland where a further series of milled Scottish coins were produced between 1637 and 1642. Briot's son-in-law, John Falconer, was associated with him in this coinage. The coins were similar but those of Briot are normally marked with a B and those of Falconer with an F. 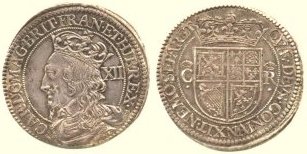 Briot was also responsible for a series of unadopted pattern coins in silver and gold, which included silver groats, threepences and half groats (two pences). Some of these coins saw circulation.

Note: At this time the Scottish unite of twelve pounds was equal to one English pound and thus the three pounds coin of 60 shilling coin was equivalent to the English crown and the 30 shilling coin equalled the English half crown. Accordingly the 12 Scottish pence coin was the same as the English shilling. The denominations were intended to circulate in both countries.

Pierre Blondeau and the designs of David Ramage and Thomas Simon

In 1651 the Commonwealth authorities, who had received favourable reports about Continental milled coins, invited Peter Blondeau from Paris to bring his machinery to London for trials. He produced pattern halfcrowns, shillings and sixpences in silver, all bearing the date 1651. A series of halfcrown and sixpence milled patterns were also designed by an Englishman, David Ramage.

However, it was not until 1656 that Oliver Cromwell, as Lord Protector, ordered the minting of coins bearing his portrait. They were produced on the machines of Peter Blondeau, from designs by Thomas Simon (also known as Thomas Symonds. Two gold denominations were minted, the smaller and most common being the broad, a forerunner of the guinea. The other was a 50 shilling coin. Neither coin seems to have entered circulation and are regarded as patterns. They were dated 1656, the same year that Blondeau returned to Paris.

Similarly the silver coins are also patterns. These consist of crowns, halfcrowns, shillings and extremely rare sixpences. Most are dated 1658, though some halfcrowns are dated 1656, and utilise similar designs to the gold. After the death of Thomas Simon some of his puncheons were used to make false dies from which a number of silver crowns and a totally spurious half-broad in gold were struck in Holland, known as the Dutch copies. In the early 18th Century the dies and puncheons were obtained by the Royal Mint and in 1738 new dies were made by John Tanner, the chief engraver and some coins were struck from them known as the "Tanner Copies". Most genuine specimens of the crown have a die flaw across the lower part of the obverse. A less obvious flaw can also be found on the obverse of the shillings.

The Change to a Milled Coinage

By the time of the restoration of Charles II in 1660, milling machines were poised to take over the minting of coins. Initially hammered coins continued in production together with some milled twopence and penny coins. From 1662 onwards the production of hammered coins ceased and henceforth all coins were machine made. In 1662 first the silver crown was minted, to be followed in 1663 by a gold coin valued initially at 20 shillings, and two other silver coins, the halfcrown and shilling.

The gold coinage of Charles II was treated as bullion and fluctuated in value above its nominal value. For example, despite a weight reduction in the intervening years it reached a value of 22 shillings in 1680. The name guinea later applied to this coin was unofficial, because much of the gold came from Guinea in Africa. At the outset it was regarded as a pound coin, worth 20 shillings, and the multiple pieces, now referred to as five and the two guineas, first introduced in 1668 and 1664 respectively, were officially five pounds and two pounds. All these coins were designed by John Roettier, chief engraver at the mint.

The so-called "Undated Maundy" silver coins of four, three, two and one pence were designed by Thomas Simon shortly before his death and introduced circa 1664-65. Despite their incorrect association with the Maundy ceremony they were currency coins. Strangely, it was not until 1674 that the denominations were completed, with the issue of a milled sixpence.