You are here
HomeNorman Coinage

Following the Battle of Hastings, the Anglo-Saxon council quickly offered the throne of England to the victor, Duke William of Normandy, who was crowned king on Christmas Day 1066. On his death in 1087, he was succeeded by his son, William II, otherwise known as William Rufus because of his red hair. When William II died in a hunting accident in the New Forest he left no direct heirs so his brother Henry became king and reigned for thirty-five years. Despite being twice married he only had two children. When his son and heir was drowned at sea in 1120 in a shipwreck crossing from France, he made his daughter Matilda his heir. However, following his death in 1135, the Council offered the throne to Stephen of Blois, Henry's nephew, condemning England to a protracted civil war. It was not until the death of Stephen's only son in 1153 that an agreement reached whereby Matilda's son, Henry of Anjou, would become king after Stephen. The following year Stephen died and, as agreed, was succeeded by Henry.

Henry II (1154-1189) was the first of the Plantagenet kings, a name derived from their badge, the "planta genista" (yellow broom). His name is mostly remembered for the murder of the Archbishop of Canterbury, Thomas à Becket in 1170. His son, Richard the Lionheart, spent most of his ten year reign away fighting in the Crusades, during which time his brother John tried to gain control of the country. When Richard died in 1199, John became king, spending most of his reign in conflict, with the French (thereby losing most of England's territory in France which had been the patrimony of William the Conqueror and Geoffrey of Anjou, Henry II's father), with the Church, which led to England being excommunicated, and with his own barons. At Runymede in 1215, John was forced to sign the Magna Carta, which conferred rights on the people (i.e. the barons). When he broke his promises, the barons enlisted help from France to move against him, but John died, to be succeeded by his nine-year-old son, Henry III.

Henry III's 56 year reign (1207-1272) was not a success, with continued civil unrest in the latter years. His son, Edward I was a much better ruler, and although unsuccessful in his wars with Scotland (against William Wallace "Braveheart"), he did subjugate Wales. His son, Edward II, was less satisfactory and after a 20 year reign was forced to abdicate in favour of his son, Edward III, during whose reign the "Black Death", bubonic plague, came to Britain. It is possible that half the population died as a result, causing Edward to break off his war with France, begun in 1337, that was later to resume and became known as the Hundred Years War.

Edward's grandson, son of Edward the Black Prince, became King Richard II in 1377, but being a minor, the country was effectively run by his uncle, John of Gaunt. Estrangement between John and Richard led to the outbreak of civil war, which ended when John's son, Henry Bolingbroke deposed Richard and became king in his place, as Henry IV, the first of the Lancastrian kings. Throughout his reign there was civil unrest and rebellions, but his son, Henry V inherited a country at peace and was able to renew the war with France. After the English victory in the Battle of Agincourt he married the daughter of Charles VI, the King of France and was thus acknowledged as his heir. Unfortunately, he died earlier than Charles and his son and heir; Henry VI, was barely a year old. For the next 30 years there was continual war with France that ended in 1453 with England losing all its French possessions except for the town of Calais.

The following year saw the renewal of the dispute between the Houses of Lancaster and York, known as the War of the Roses from their respective emblems, the red rose of Lancaster and the white rose of York. In 1461 Henry VI was deposed by Edward, Duke of York, who reigned in his place as Edward IV. Henry was briefly restored in 1470, but Edward returned in 1471 and ruled for another twelve years. When he died his son became king as Edward V, only for his uncle, Richard of Gloucester to usurp the throne to become the infamous King Richard III. The murder (alleged or otherwise) of his nephews, the "Princes in the Tower" alienated many of his supporters and when the exiled Henry Tudor, Earl of Richmond, invaded the country in 1485, many deserted Richard's cause. At the Battle of Bosworth, Richard was killed and Henry became king, the first of the Tudor monarchs.

William the Conqueror (1066-1087) continued to mint silver pennies to the same standard and fineness as his Anglo-Saxon predecessors, circa 1.3 gm (22-24 grains). During his reign some 70 mints were in operation at one time or another, some only briefly. It is thought that this was because mints were opened in various towns and cities as the king travelled around the country. During the reign of Henry II the quality both of design and production declined rapidly. Clipping the edges was prevalent and forgery was rife. In addition the moneyers at the mints produced coins that were underweight and used debased silver. The problem was so great the in 1124 Henry summoned all the moneyers to Winchester (at the time the capital of England) to the Assize of Moneyers. Although hefty punishments were meted out, including mutilation, the abuses did not stop.

The turbulence of Stephen's reign meant that the coinage declined even further, which continued at first under Henry II, reaching new lows in crudity and quality. In order to restore confidence, a new coin type was introducced in 1180 known as the Short Cross penny (from its reverse design) which was of a good weight and fineness of silver, and a better style. The design was continued for nearly 70 years by Richard I and John with unchanged obverse legend, still reading HENRICUS REX (King Henry), and for the first 30 years of Henry III.

In 1247 Short Cross penny was discontnued and the reverse design changed to the Long Cross type, the idea being that the extension of the cross to the edge of the coin was a guard against the continuing practice of clipping. Henry's titles were extended to include III or the word TERCI (Third).

Save for a few extremely rare halfpennies the only coinage produced was the silver penny. The need for a smaller denomination as the economy began a gradual shift towards being money based rather than barter, was met by halving the coins or cutting them into quarters ("fourthings", which became farthings). The double lines of the reverse cross on the Long Cross penny made it easier and more accurate to make these divisions.

By the time of Edward I, there was a need for other denominations beside the penny. A short-lived experiment with a gold coin valued at 20 silver pence issued by Henry III was doomed by a subsequent rise in the value of gold which meant that most were melted down for profit. In 1279 Edward commenced a recoinage, the basis of which was a redesigned penny minted in millions, with a more realistic portrait of the king, groats (valued at four pence), halfpennies and farthings. The old pennies could be taken to the mint and exchanged for the new coins. The groat was unsuccessful because it was underweight. The others were all of a more acceptable standard, made more popular because the design made clipping easier to detect. On the new coinage privy marks were introduced as a check on production standards in place of the former moneyer's names.

It was not until 1351, in the reign of Edward III, that the groat reappeared, together with a half-groat of two pence value. This time the weights were correctly proportioned and the new denominations were accepted. 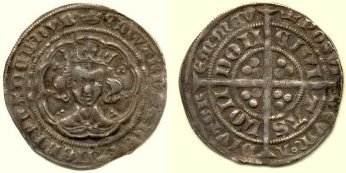 Even more innovatory was the introduction of a gold coinage, made necessary because several European countries had already done so. The first coins were by two Florentine engravers in 1343 and were called the double leopard or florin, leopard (half florin) and helm, with values of six shillings, three shillings and one shilling and sixpence respectively (one shilling = 12 pence). Although based on contemporary French standards, the gold in the coins had been overvalued and consequently they were rejected by the public. The following year Edward tried again, this time successfully, with the gold noble, valued at six shillings and eight pence (80 pence), half noble (three shillings and four pence = 40 pence) and, two years later, the quarter noble of one shilling and eight pence (20 pence). These new coins were of the correct weight for the values assigned to them.

The new system of gold and silver coinage continued during the following reigns virtually unchanged until 1412, in the reign of Henry IV. A shortage of bullion forced an approximately 10 per cent reduction in the weight of the gold coinage and a 16 per cent decrease in the silver, bringing the English coinage into line with prevailing Continental standards. 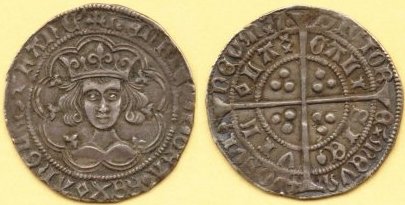 These remained the standards until 1464 when the cost of the interminable wars coupled with another shortage of bullion caused Edward IV to make further reductions. All the gold coins in circulation were revalued upwards, the noble to eight shillings and four pence, the half noble to four shillings and two pence and so on. Two new coins were introduced, the rose noble with a value of ten shillings and the angel (so-called because of its obverse design depicting St. Michael killing a dragon) given the former value of the noble, six shillings and eight pence. The rose noble was unpopular and was discontinued after a few years but the angel was very popular.

The upward valuation of the gold coinage was exactly matched by a corresponding reduction in the weight of the silver coins, for example the groat changed from a weight of 60 grains to one of 48 grains. When Edward returned to the throne following the brief second reign of Henry VI, the older gold coins were phased out and only the angel and a half angel were minted, together with a small number of silver groats, half groats, pennies, halfpennies and farthings.

From 1066 to 1485 no less than 94 different mints operated in England, plus Calais in France. Of these, some were only of a transient nature, for example Lewes in Sussex during the reign of Richard I. Others enjoyed a brief life for military purposes, such as Berwick on Tweed during the wars with Scotland conducted by Edward I, Edward II and Edward III. The use of Calais by Edward III, Richard II, Henry IV and Henry VI were as much a political statement as a necessity. The main mints throughout the period were:

Another important mint was that of Bury St. Edmunds which produced coins until the reign of Edward III.

A larger number of mints were only in operation until the reign of Henry III. These were:
Carlisle
Chester (to Edward I)
Exeter (to Edward I)
Gloucester
Hereford
Ilchester
Ipswich (to John)
Lincoln (to Edward I)
Northampton
Norwich
Oxford
Shrewsbury
Wallingford
Wilton
Winchester

The vast majority of mints only produced coins during the early part of the period, from William I to Henry II or earlier.