During Victorian times there was movement towards the introduction of a decimal coinage. As a preliminary, the half crown ceased to be minted in 1850 and a new coin, the florin with a value of two shillings, a tenth of a pound, took its place. Nevertheless, although the idea was finally abandoned and the half crown reintroduced in 1874, the florin continued to be minted. That the idea of decimalization still lingered is shown by the introduction of the double florin, one fifth of a pound, in 1887, but this coin proved unpopular and was discontinued after four years. At the time it was known as the "Barmaid's ruin" because it was so easily mistaken for the crown.

In 1961 a Committee of Enquiry was set up to consider again the adoption of a decimal currency. In its report, published in 1968, it recommended a currency still based on the pound, but divided into a hundred pennies. A minority of the committee favoured a currency based on ten shillings, with each shilling worth ten pence. In the new system the florin would be retained and become ten new pence and the shilling five new pence and all new coins minted would show these values. There would be three new bronze coins with values of two, one and half new pence and a new fifty pence coin to replace the ten shilling note. The letter "d" to denote pence was to be replaced by "p", entering common parlance as "pee" or "new pee". Almost as an afterthought, the old sixpence was also retained with a value of two and a half new pence, but no more were to be minted. It eventually ceased to be legal tender in 1980. The new coinage was to become effective on 15 February 1971.

As a preliminary, the cupro-nickel florins and shillings minted from 1968 onwards showed their value in new pence. The distinctive seven-sided fifty pence coin entered circulation in October 1969 and the following year, the ten shilling note ceased to be printed though it still remained in circulation for some years afterwards. Production of all the old denominations ceased as the Royal Mint geared up in readiness for the changeover. However, in 1968, before ceasing completely, a large number of souvenir proof sets in the old currency were minted dated 1970 and specimen sets of the new coins, but dated 1971, were made available at the same time.

The introduction of decimalization in 1971 produced much confusion and anomalies. Dual pricing was allowed in order for people to adjust to the new coinage but this seemed to cause more problems than a quick changeover. Eventually a law was passed stating that all goods must be price only in new pence.

Commemorative crowns were still issued with a value of 25 new pence. These were to celebrate the Queen's 25th Wedding Anniversary in 1971, her Silver Jubilee in 1977, the Queen Mother's 80th birthday in 1980 and finally the wedding of Price Charles and Lady Diana Spencer in 1981. Thereafter, all new crowns were given a value of £5, although the first of these did not appear until 1990. None of these coins were intended for circulation but they do have legal tender status.

The decimal coinage remained unchanged until 1982 when a new seven-sided twenty pence coin was introduced. There had been considerable demand for such a coin for several years. At the same time the word "New" was dropped from the value shown on the reverse of all coins as it was considered that by now there would no longer be any confusion with the old coinage. The following year, the pound note was replaced with a brass coin due to inflation, which had made the printing of the notes uneconomic (they had a relatively short life and considerable security measures and controls had to be exercised in their printing). These brass coins make an interesting collection as each year the reverse design is changed, each reverse representing one of the nations that go to make up Britain. So far there have been at least ten different reverse types used.

Inflation also caused the demise of the half pence, which was discontinued in 1983 and demonetised in December 1984. Half penny coins with the 1984 date were only issued in proof and uncirculated sets. A new two pound coin was minted in 1986 to commemorate the Commonwealth Games, with further issues in 1989, 1994, 1995 and 1996. As with the crowns, these coins were all legal tender but very few saw circulation. The new £2 coin of 1997 discontinued the commemorative series and was intended for normal circulation from the outset. Unlike the earlier coins, all of which were made from nickel-brass, the new coins were bimetallic with a central cupro-nickel inner disc bonded to an outer brass ring. In the late 1990's these coin sparked off a manic treasure hunt when a rumour spread that coins with the early obverse, which showed the queen wearing a necklace, were extremely rare and valuable. Some specimens changed hands for over £100 because of this baseless rumour. 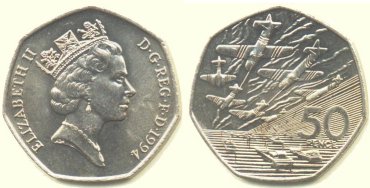 £2 coin issued in 1986 to celebrate the Commonwealth Games

The 50 pence coin was also sued for various commemorative issues. Although not intended for circulation, being included only in proof and uncirculated specimen sets, nonetheless many were commonly encountered in normal use.

By 1990, a combination of inflation and the realisation that the cupro-nickel coins were unnecessarily large, led to the five pence coin being reduced in weight and size, from 24mm diameter to 18mm. The ten pence coin followed in 1992, reduced down to a size similar to the old five pence but, to prevent fraudulent use of old five pence coins, particularly in cash machines, it was made slightly larger and heavier. In 1997 the last of the cupro-nickel coins, the fifty pence piece, suffered a similar fate, the new coin weighing only 8.1 grammes instead of 13.5 grammes.

An innovation in 1992, also the result of inflation, led to the minting of the one and two pence coins in copper plated steel instead of bronze.

NOTE: A large number of proof issues of decimal coins were struck in piedfort (meaning a much thicker than normal coin), and in silver and gold. None of these were ever intended for circulation.