You are here
HomeThe Great Re-coinage

The so-called "Great Recoinage" that commenced in 1816 was fundamentally concerned with the re-introduction of a silver coinage and a change in the gold coinage from the guinea valued at 21 shillings to the slightly lighter sovereign worth 20 shillings. The value of the shilling remained unchanged at twelve pence.

The sovereign, as issued in 1817, made first use of the famous "St. George and dragon" design by Benedetto Pistrucci, still employed today. The introduction of the half sovereign came at the same time. The standard, 8 grammes of 22 carat gold for the sovereign, 4 grammes for the half, has been maintained ever since.

With the value of the sovereign or gold pound set at 20 shillings this gave a fixed value of 240 copper pennies. Amounts were written out in pounds, shillings and pence e.g. £12. 14s. 6d.

The new silver coinage began with the halfcrowns, shillings and sixpences issued in 1816, followed by a crown in 1818. The mintage figures for these were colossal compared with anything from earlier years. By comparison, the total number of silver coins produced in 1787 was about one and a half million. Many of these mintage figures were not exceeded for many decades. 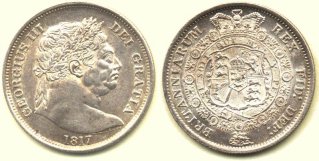 Silver halfcrown of George III with "bull's head" bust 1817
It was almost immediately replaced by a more attractive portrait engraved by Thomas Wyon.
However, a similar bust was retained on the other silver coinage

The system of coinage begun in 1816 was to endure with only minor changes until decimalization in 1970. The minting of copper coins resumed in 1821 when farthings were produced for George IV. These were followed by pennies and halfpence from 1825 onwards. All three denominations continued to be produced in most years until 1860 based on the standards established in 1806 and used a seated figure of Britannia for the reverse design. The date was carried on the obverse below the portrait bust. Most of the obverses were engraved by William Wyon, whose initials often appear in the design.

In 1860 a change to the use of bronze instead of copper brought much smaller and lighter coins, half that of the copper coinage, and the use of a new portrait bust of Queen Victoria wearing her hair in a bun, hence the description "bun penny" etc. This was engraved by William Wyon's son, Leonard Charles Wyon. The standard for all three bronze coins was maintained until the reign of Queen Elizabeth II. Production of the farthing ended in 1956 and it ceased to be legal tender after 1960. The penny and halfpenny were minted until 1967. The penny enjoyed a brief life after the introduction of decimal coins in 1970 before being demonetized on 31 August 1971. The halfpenny ceased to be legal tender in 1969.

In silver, crowns were minted until 1847, among them the so-called "Gothic Crown" of Queen Victoria, probably the most beautiful coin ever made. This was followed by a gap of 40 years until the Jubilee coinage of 1887, when production was resumed. After 1902 production was abandoned, only to be reintroduced in the reign of George V in 1927, after which it became a commemorative issue rather than being intended for circulation.

This Winston Churchill crown is thought by many to be the most unattractive coin ever produced, an unfitting end to a noble series.

The halfcrown was minted fairly constantly until 1850 when it was supplanted by the florin valued at two shillings, intended as the first step to the introduction of a decimal coinage. In 1874, after the interest in decimalization had waned, the halfcrown was reintroduced, and continued in parallel to the florin until 1967. It was demonetized in December 1969.

The florin itself, when first introduced in 1849, caused something of a furore as it omitted the letters "D.G.", meaning Dea Gratia (By the grace of God) from the obverse legend and was dubbed the "Godless florin". The omission was corrected on subsequent issues. Those issued 1851-1887 used a "Gothic" bust and lettering similar to that on the crown. The florin was incorporated seamlessly into the decimal coinage of 1970 as ten new pence, well over a century after the purpose for which it was originally intended. It remained legal tender until 1992. 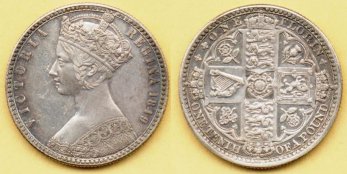 An innovation in 1887 was the double florin or four-shilling piece, forming part of the series of coins struck to mark the Queen's Jubilee. This series used the new "Jubilee head" portrait bust designed by Sir Joseph Edgar Boehm. This double florin was unpopular with the public and only lasted three years before it was discontinued.

The shilling was struck in most years until 1966. From 1831 to 1887 it used the a reverse incorporating the words "ONE SHILLING" surmounted by a crown and surrounded by oak leaves.

The shillings of George V and Elizabeth II had two different reverse types. One with a lion standing on a crown is known as the English shilling and the other, with a lion seated on a crown with shields bearing the cross of St. Andrew and a thistle on either side, is called the Scottish shilling. All shillings from 1816 onwards remained legal tender after decimalization in 1970, valued at five new pence until finally demonetized in 1990. 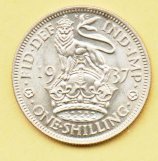 The sixpence was also struck in most years until 1967 and briefly became two and a half new pence after decimalization until demonetized. Silver groats (fourpence) intended for circulation, as distinct from the Maundy fourpence, were only minted in the period 1836 to 1862. The reverse is a seated figure of Britannia.

The silver threepence piece used for currency was exactly the same as the Maundy threepence coin until 1927 when the reverse design was changed to oak leaves and acorns for George V and a Tudor rose for George VI, the latter continuing to be produced until 1945.

In 1937 a new 3d coin was introduced, a brass coin with twelve sides. This was based on a pattern produced for Edward VIII and continued until 1967, production ceasing following decimalization.

During the whole of the period following the great recoinage there were only two other significant changes to the currency. The first was the issue of £1 and ten shillings Treasury notes during World War I (1914-18). Although these were discontinued in 1922, from 1928 onwards Bank of England notes became a permanent part of the currency. Higher denomination promissory bank notes had been a feature of the economy since the mid-eighteenth century, with the name of the person to whom it was payable written in by hand. From 1855 these were made payable to bearer and were used for the convenient transfer and payment of large sums rather than as genuine currency, though this role gradually changed in time and their use became more accepted, especially after 1930. These were in denominations of five (the famous "white fiver"), ten, twenty, fifty, one hundred, two hundred, five hundred and one thousand pounds. These continued to be issued until 1944, after which only the £5 note was produced. It was not until 1957 that £5 notes truly became part of the money in general circulation, with £10 and £20 notes added in the 1960's.

Although sovereigns continued to be produced, they were treated solely as bullion once Britain had abandoned the gold standard in the early 1930's, trading above their nominal value of 20 shillings. The other major change was the debasement of the silver coinage from 92.5% silver to only 50%. This took place in 1920 and was followed in 1947 by the substitution of cupro-nickel instead of silver.

It should be noted that although 1967 was the last year of minting the old coinage for currency, commemorative proof sets including all current denominations were made in 1970 to signal their passing. Pre-decimal 10 new pence and 5 new pence coins replaced the florin and shilling in production from 1968 to 1970.

Appendix I - Kings and Queens from the Great Recoinage to the present day.

Note: Only pattern coins were produced for Edward VIII, however, some of these, particularly the brass threepence, did escape into circulation.

In 1871, during the reign of Queen Victoria, gold sovereigns and half-sovereigns began to be minted in Sydney, Australia. To differentiate these coins the letter S was added below the shield on the reverse of the coin. Another mint was opened in Melbourne in 1872 and, towards the end of the reign a further mint was opened in Perth. On some reverses the mintmarks for these series were also placed below the head on the obverse.

During the reign of Edward VII a mint in Ottawa, Canada, produced sovereigns, but no half-sovereigns, from 1908 to 1910, mintmarked C (to denote Canada). These coins are comparatively scarce and consequently command a premium. The mint continued to produce sovereigns for George V, most of which are reasonably common. Sovereigns were also minted in Bombay, India, for George V, during 1918 and marked I. From 1923 to 1932 sovereigns were minted in Pretoria, South Africa, with some half-sovereigns during 1925-26, mintmark SA.

From 1874 to 1882 the bronze penny, halfpenny and farthing were minted by Messrs Ralph Heaton of Birmingham and bear a small letter H below the date on the reverse. The Heaton mint again produced pennies in 1912 and 1918-19 denoted by the letter H to the left of the date. Also in 1918-19 the Kings Norton Metal Co, Birmingham, produced pennies marked KN.

Following a precedent set by Benedetto Pistrucci on his 1818 crown for George III, where his name was added beneath the obverse bust and the exergual line on the reverse (in letters so small they resemble a line of dots), designers placed their initials on the coins, usually under the obverse bust. Among these were Pistrucci himself (BP) (which continued to be incorporated in his famous St George & dragon reverse design) and William Wyon (WW and W.WYON).

Gold and silver coins of Victoria minted between 1863 and 1880 have a die number incorporated into the reverse design. Dies are known with quite high numbers but modern studies have not yet found examples of all the numbers used.

From 1897 to 1917 farthings were issued which had been artificially darkened by the mint. Allegedly this was done to prevent confusion with the gold half-sovereign. Farthings from this period which are not darkened have been cleaned.